KDM is professional in all customized metal products including the sheet metal frames that are commonly used in a wide range of industries such as telecommunications, electrical, electronics, medical, defense, and aerospace.

Our sheet metal frames are made to meet the requirements of each industry. We have engineers to assure effective process in fabrications of frames. KDM also provides full production capabilities.

KDM has a technical team for the development of sheet metal products from designing to the production of sheet metal frames parts. Our team provides fitting and assembling services for sheet metal accessories.

KDM manufactured a lot of sheet metal products in different forms including cold-rolled steel, stainless steel, hot rolled steel, and aluminum which vary in some categories like thickness, hardness, ideal application, and strength. 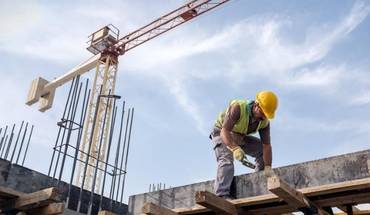 KDM sheet metal frame is commonly used in the construction industry and encompasses many types of buildings such as hotels, malls, and so on.  It can also be used both external and internal for building purposes including steel beams, and columns to act as support. 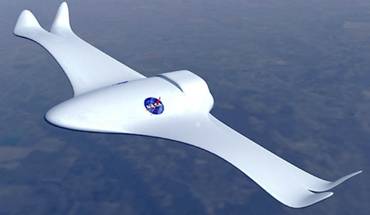 The sheet metal frame has a different component that is used for airplanes and spacecraft including the wings and fuselages. These are crafted from special aluminum alloy which is combined with the lightness and the strength of steel. 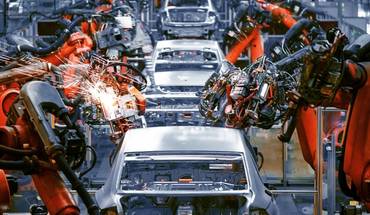 Our sheet metal frames are also used in automotive industry cars and other vehicles. These are made of steel, metal, stainless steel, aluminum, and copper to make the car’s frame, engine, internal, and external components.

Our sheet metal frames are strong, durable, and will serve you for a long time. It is much less expensive in material cost and manufacturing process.

Contact us for your custom sheet metal frame needs! 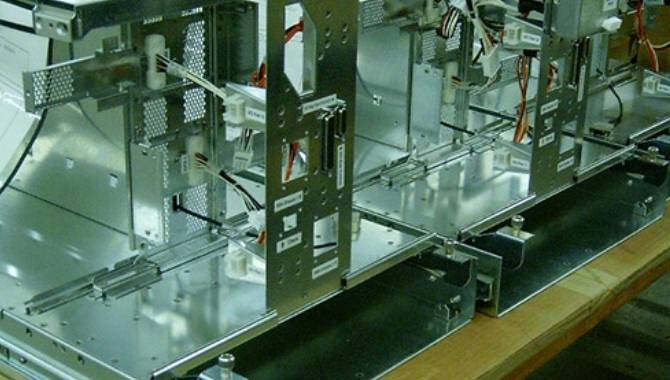 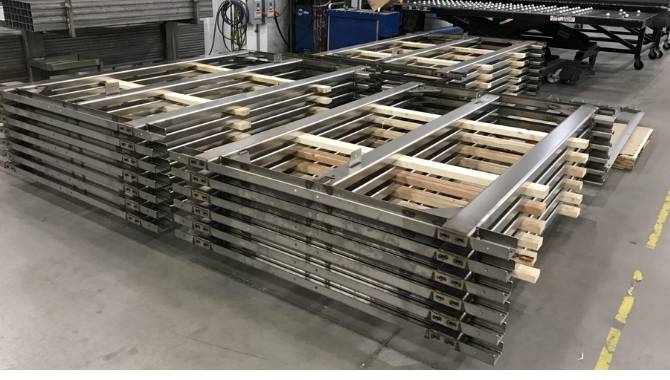 Send us your inquiries!

We offer custom metal frames from turning raw metals into pre-made shapes for assembly. KDM staffs take a degree of practice and skills to manage our fabrications process.

Send us your inquiries! 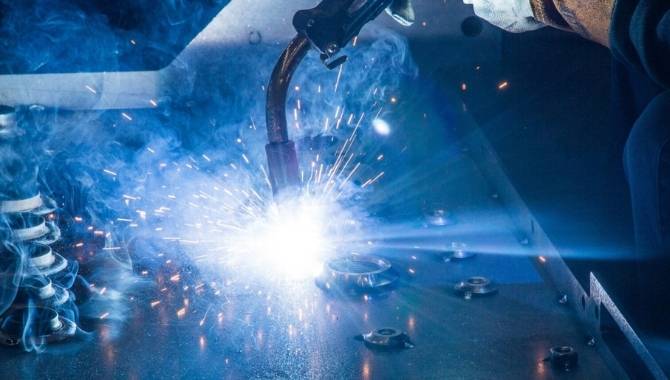 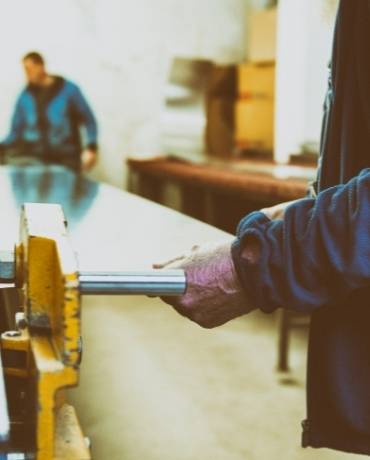 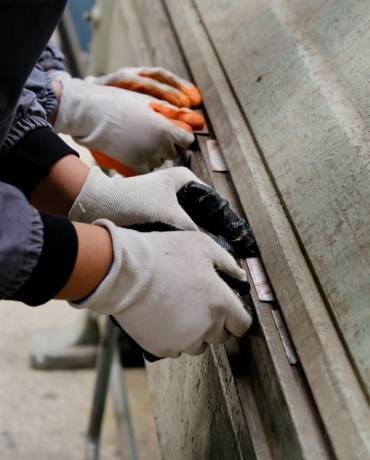 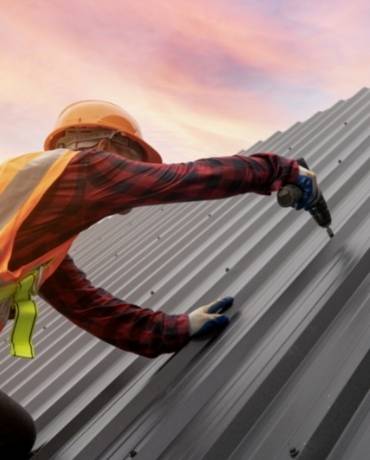 A reason this guide explores everything you need to know about sheet metal frame.

So, keep reading to learn more.

What Is Sheet Metal Frame?

A steel metal frame is a rectangular or square-shaped piece of metal that has a two-dimensional shape and the inner center has been cut out.

The major use of a sheet metal frame is to frame an area of particular interest or surround something. 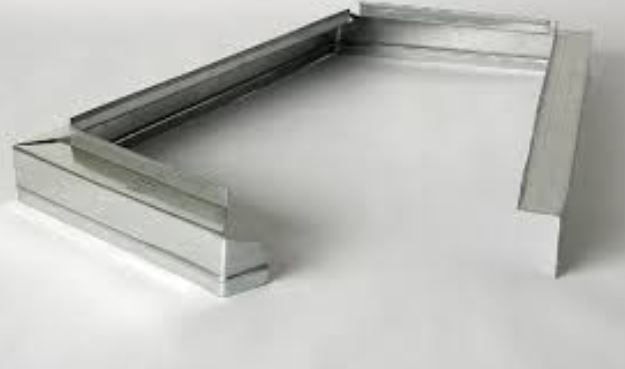 Some of the benefits of sheet metal frames include:

Wood or concrete that are weight-bearing items is heavier and weaker than structural steel components.

A standard lean mass steel fabrication is half or less light than a hardwood counterpart.

As a result, steel frame metal is significantly more robust and sturdy than other frame options.

However, if a fire breaks out, the steel metal frame minimizes the danger of a building catching fire and slows the spread of the fire.

Structural steel has coatings that hinder the chances of fire catching the metal frame.

Based on its carbon content, structural steel can have excellent moisture resistance.

A structural steel component that has additional powder treatment and is coated with hot zinc for better rust resistance will be even more resistant to the effects of water.

This makes it a crucial issue for parts exposed to the weather. 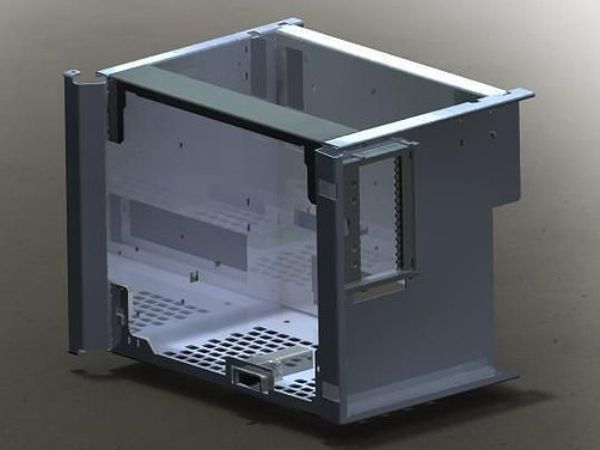 Steel studs come in all sorts of dimensions and can be custom-fabricated. As a result, they can be made to support specified loads in a variety of building types and dimensions.

Some insects and animals make holes that damage especially wooden frames but do not degrade structural steel components.

Steel has excellent resistance to such and cannot be damaged hence making it one of the best frames.

During sheet metal fabrication, several materials can be used other than steel.

The other common metals used include; 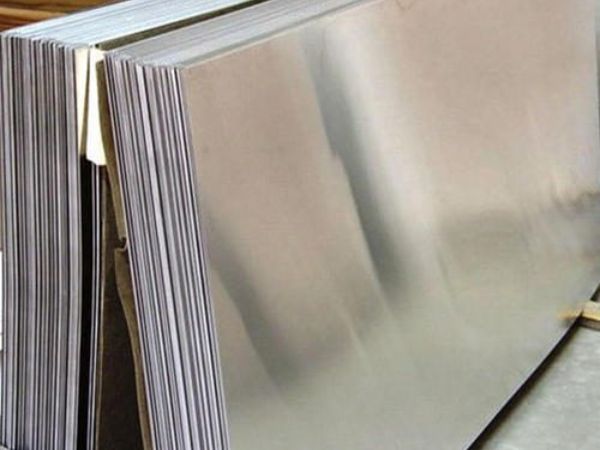 Aluminum is a light metal and is pricier than steel.

Aluminum reacts well to machining and similar to stainless steel, it does not rust, it is a preferred steel substitute.

Furthermore, it has excellent thermal and electrical conductivity.

However, it is not as strong as steel and should not be exposed to temperatures that exceed our hundred degrees Fahrenheit. 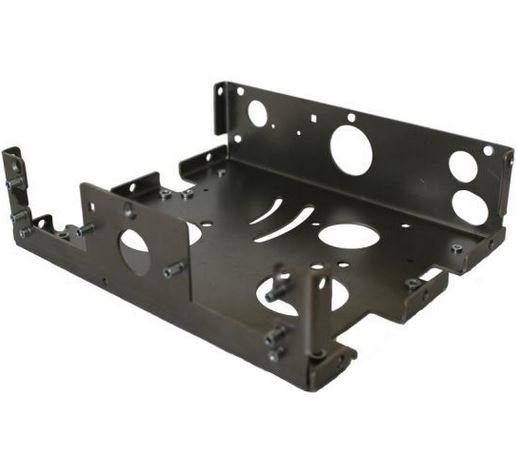 Aluminum parts are used in metal frames where extreme temperatures are prevalent because of their properties.

Brass is a metal that is also used in the fabrication of sheet metal frames. It is made up of copper and zinc. 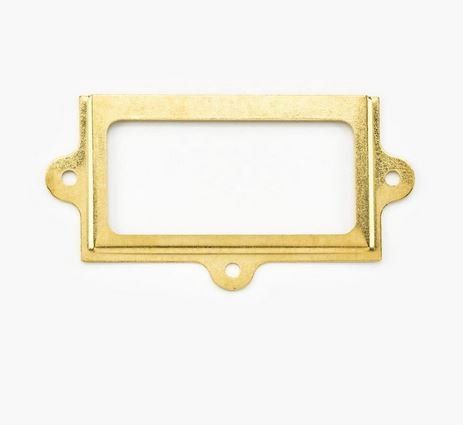 It has good acoustic qualities, hence it’s used as the primary metal in a lot of instruments.

It can also be found in doorknobs, nuts, bolts, and pipes.

Copper is rather expensive, even though it is not as strong as aluminum or steel and can be difficult to machine or weld.

It responds well to bending and can provide lovely outcomes making it very easy to use for frames. 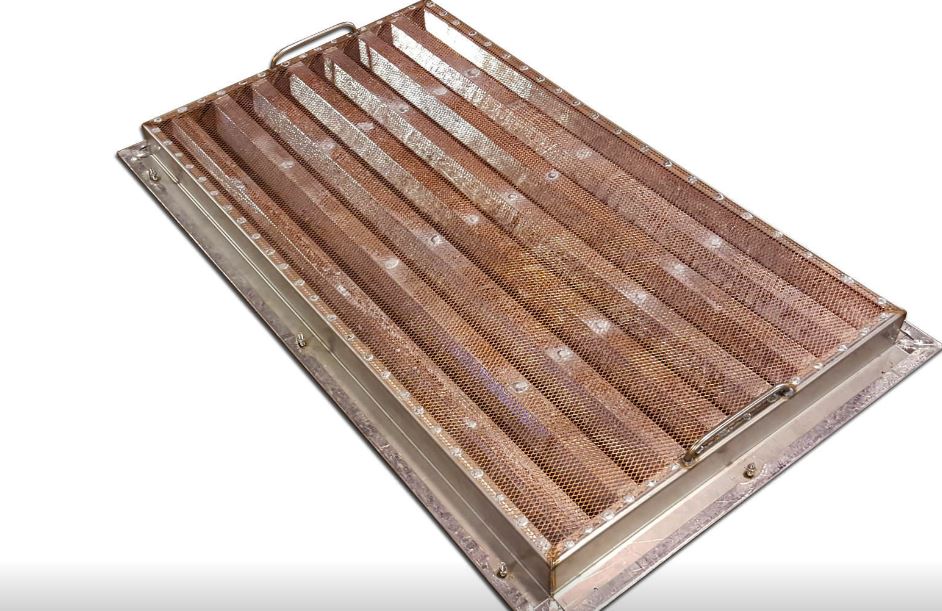 It does not rust, but it can develop a unique and appealing patina finish with time.

Steel, an alloy of iron and carbon that may also contain additional components such as limestone or coal, is the most common metal used for part production.

Steel is popular because it is inexpensive and simple to weld, even though it is less ductile and more difficult to cut than other metals. 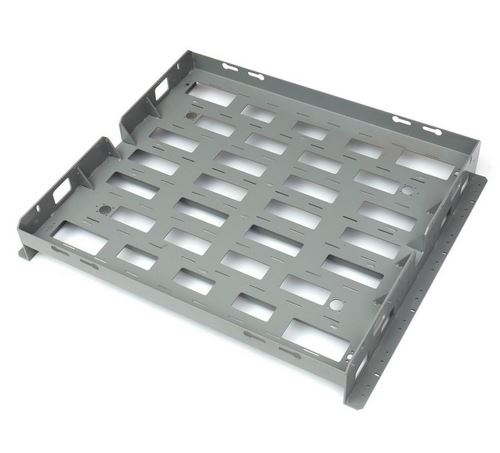 The major disadvantage of steel is corrosion, due to this, there are a variety of steel alloys available for metal manufacturing.

Stainless steel is more substantial than regular steel and is resistant to corrosion.

Stainless steel is common since its chromium component protects it from rusting, although it is slightly more expensive than normal steel.

You can use stainless steel in a variety of steel products that need to be exposed to air or water and not rust.

Stainless steel is relatively easy to deal with, but its anti-corrosive qualities can be compromised by joining it with other metals.

Even though all-steel incorporates carbon, carbon steel is distinguished by its higher content.

Steel metals are stronger if they contain a lot of carbon in them, however, getting them into the right shape is more difficult.

The frame faces are stiffer as a result of this.

The throat dimension is frequently mistaken with this phrase.

The dimensions of the soffit will depend on the width of the jamb depth changes.

Frame profiles can either be single rabbet or double rabbet.

A horizontal mullion commonly separates the transom glass or panel from the door below.

This process employs manual and power equipment, as well as handheld plasma torches from CNC cutters, such as lasers to chisel, shear or saw. 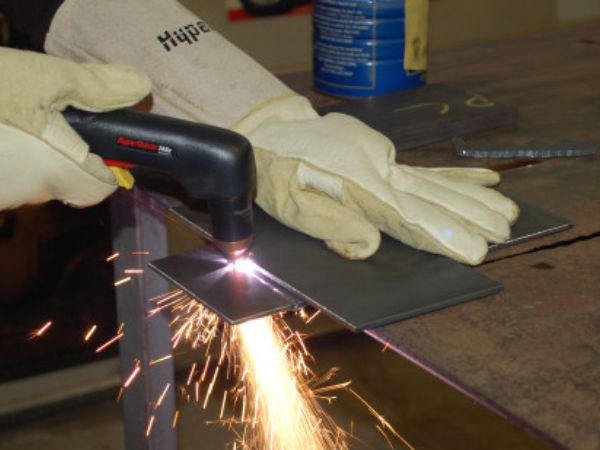 the perspective of cutting, can be considered a subtractive manufacturing process.

This is because you create the functional parts by removing chunks of the metal.

Cutting sheet metal can be done with a variety of machines, some of which are specific to sheet metal manufacturing.

Cutting can be classified into two parts: without shear and with shear.

You can use the cuts produced by these processes for non-industrial end products due to their lower precision, especially in comparison to processes that do not use shears.

A basic shear cuts through the material in a straight line on the flat metal stock using an upper blade and a lower blade just like a scissors does.

Punching or blanking is another type of shear cutting and it involves punching designs out of a sheet of metal and discarding the remains using a machine.

Non-shear cutting can be done using laser cutting with a focused beam of light, plasma cutting through heated compressed gasses.

It can also be done using waterjet cutting through concentrated streams of water-filled abrasives and machining with drill bits abrasives.

Bending, stamping, roll forming, stretching, and spinning is examples of forming procedures. Forming reshapes and reconfigures the material to fit the desired shapes.

Bending is the process of folding sheet metal into U-shapes, V-shapes, and channels using machinery such as press brakes.

Bending thick sheet metal gauges is more challenging. Decambering, on the other hand, is a technique that removes horizontal bends on sheet metal from strip-shaped parts.

Stamping is almost the same as punching, but in stamping, you don’t have to do away with the material.

The importance of assembly in the whole manufacturing process cannot be overstated. Fasteners such as bolts, rivets, and screws are used to join sheet metal components together. Welding, riveting, brazing, and the usage of adhesives are all critical assembly procedures.

Welding is a technique that involves melting a segment of metal where it will connect with another component while also providing filler.

Brazing is similar to welding, however, it melts the filler metal instead of the sheets. In the junction, the molten filler metal, which is a braze alloy, solidifies.

Adhesives can be used alone or in combination with other techniques to hold metal sheets in place.

Machinery adhesives are employed alongside other joining methods, while structural adhesives can be utilized on their own to form the joints.

A surface finish enhances the appearance and the functionality of a metal.

It protects the sheet metal part from corrosion or any physical damage.

The surface finishes you can use on sheet metal frames include;

A long-lasting, porous anodic oxide layer is formed on the surface of the aluminum.

These frames are frequently encountered in correctional facilities and other high-traffic areas. The thickness of 12-gauge metal is 0.093 inches.

The sort of profile available in 12-gauge steel is likewise limited, so check with your frame distributor before choosing this gauge of metal.

The next thickness for hollow metal frames is 14 gauge.

This gauge has a thickness of 0.067 inches and is utilized in high-abuse, extra-heavy-duty applications.

Because it is substantially more robust, it is typically utilized at outside apertures. Cold-rolled steel or galvannealed metal can also be used.

It’s best suited for hollow metal doors made of 16 or 14-gauge metal.

16 gauge is the thinnest gauge used for hollow metal commercial door frames. This is a heavy-gauge metal that is commonly used in construction.

16 gauge steel is 0.053 inches thick and can be cold-rolled or galvannealed for rust resistance.

It works with commercial wood doors as well as hollow metal doors made of 18 or 16-gauge steel.

There are several methods used to test the quality and durability of sheet metal.

These tests give an idea about how the sheet metal frames are resistant.

The tests include; the cupping test, the earing test, and the hole expansion test.

A cup is constructed on a metal sheet to perform the cupping test.

This is accomplished by pressing the cup firmly against the sample sheet until a crack appears. Following this, the sheet is inspected to see if it has bent or developed any cracks.

The depth of the cup is then measured concerning the force applied by the cupping machine.

The earing test is a testing process that the metalworking industry uses to determine the qualities of sheet metal forming.

You can assess the earing tendency after drawing the cup.

The average height of the ear peaks and valleys is measured, and the ear height as a percentage is calculated.

The hole expansion test is a test method used in the metalworking industry to measure the ductility of punched sheet metal’s edges.

Forming technology provides additional obstacles, specifically in the context of high-strength steels, due to the creation of edge cracks.

Computer and server back frames

For all your sheet metal frames from China, contact us now.